Medical Disposables & Supplies Limited, for the six months ended September 2020 reported Revenue amounting $1.14 billion, an increase of 2%, relative to $1.12 billion booked the previous year. For the second quarter revenues totalled $630.16 million up 12% year over year (2019: $565.04 million). MDS noted, “The growth in sales is being driven by increases in the performance of the Pharmaceutical and Medical Divisions. This may be attributed to the partial reopening of the economy as well as the relaxation of some of the measures being employed to curtail the spread of Covid-19.”

Also, MDS mentioned, “We continue to be affected by the containment strategies imposed to combat the spread of COVID-19. However, we continue to realign our business strategies to focus on deeper market penetration, while capitalizing on several opportunities to provide medical responses with regards to the pandemic.” 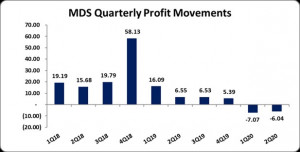