Dr. Ian Blair, Independent Non-Executive Director – Main Event Entertainment Group, commented on the financial performance of the business for the year ended October 31, 2019. The company achieved revenue of $1.80 billion, a 29% increase over the $1.40 billion reported in 2018. Gross profit increased by 21% to $776.72 million compared to $640.12 million a year earlier. Net profit ended at $97 million, which represented a 3% increase over the $94.66 million reported the previous year. 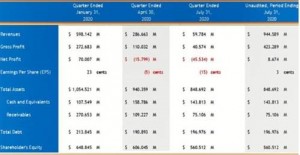 In explaining the company’s cash position versus its profitability; Dr Blair noted that “the company started out with a large capital expenditure in the last half of the financial year 2019 and the early parts of the 2020 financial year. The results of the capital expenditure were evident in our first quarter.” He added that, “depreciation charges of over $30 million were the reason behind the profit figures not being in line with the liquidity scenario of the company. This is because we had to write off a higher asset value than normal, in anticipation of the activities the company planned to perform in 2020.”

Some Covid-19 response measures according to Dr. Ian Blair, were outlined as follows:

Outlook for Main Events, according to Management includes:

Company Disclosure -The information contained herein has been obtained from sources believed to be reliable, however, its accuracy and completeness cannot be guaranteed. You are hereby notified that any disclosure, copying, distribution, or taking any action in reliance on the contents of this information is strictly prohibited and may be unlawful. Mayberry may effect transactions or have positions in securities mentioned herein. In addition, employees of Mayberry may have positions and effect transactions in the securities mentioned herein.