According to the Statistical Institute of Jamaica (STATIN) the consumer price index for March 2021 was 108.3 resulting in inflation rate of 1.1%, when compared to the previous month’s deflation rate of 0.1%. STATIN noted that, “This movement represented the largest increase since the start of the 2021 calendar year. The inflation rate was primarily impacted by the 4.6 per cent increase in the index for the ‘Housing, Water, Electricity, Gas and Other Fuels’ division.” The overall movement was however tempered by the decline of 1.8 per cent in the index for the group ‘Water Supply, And Miscellaneous Services Related to the Dwelling’.

The ‘Alcoholic Beverages, Tobacco and Narcotics’ division grew by 0.2% for March 2021, resulting from increased prices within the ‘Alcoholic Beverages’ due to the rise in prices for spirits, wines and beers. While the division for ‘Clothing and Footwear’ observed an increase of 0.2% in its index for March 2021. In the index, the groups ‘Clothing’ and ‘Footwear’ climbed by 0.3% and 0.1%, respectively.

The index for the ‘Housing, Water, Electricity, Gas and Other Fuels’ division advanced by 4.6% influenced by increased rates for electricity, water and sewage. This was mainly due to a 13.1% increase for the group ‘Actual Rentals for Housing’ and the rise in the rates for electricity which resulted in an 8.6% increase for the group ‘Electricity, Gas and Other Fuels’. These increases were however tempered by a decline in the rates for water and sewage which led to the index for the group ‘Water Supply and Miscellaneous Services Relating to the Dwelling’ declining by 1.8%.

The division for ‘Health’ recorded an increase of 0.3% in its index for March 2021. The main contributing factor to this upward movement were increases in the groups ‘Medicines and Health Products’ which increased by 0.3%. The index ‘Transport’ rose by 0.5%. According to STATIN “this was largely due to higher petrol prices”.

The ‘Recreation, Sport and Culture’ division registered a 0.1% rise for March 2021. Resulting from a 0.2% increase for items within the groups ‘Newspapers, Books and Stationery’. Lastly, the index for the ‘Personal Care, Social Protection and Miscellaneous Good and Services’ division rose by 0.3% for the period under review. This was due to an increase in the cost of some personal care good and services. 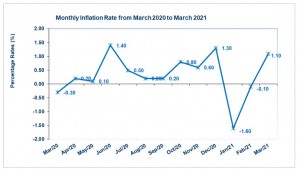