The index for the ‘Housing, Water, Electricity, Gas and Other Fuels’ division recorded a 4.6% increase in its index for September 2018, following a 0.1% upward movement for August 2018. This was a result of the groups ‘Electricity, Gas and Other Fuels’ registering an increase of 7.6%. According to STATIN, this movement was “due to higher electricity rates.” In addition, the group ‘Water Supply and Miscellaneous Services Related to the Dwelling’ increased 3.1% due to increased water and sewage rates.

The index for the ‘Food and Non-Alcoholic Beverages’ division also recorded a 0.9% increase in its index for September 2018, following a 1.6% upward movement for August 2018. This resulted from the upward movements within the ‘Food’ and ‘Non-Alcoholic Beverages’ groups by 0.9% and 0.4% respectively. Within the ‘Food’ group, the class ‘Vegetables and Starchy Foods’ increased 2.1% where the largest contributor ‘Fruits’ increased by 1.8% followed by ‘Bread and Cereals’ increasing 0.6% and ‘Meat’ and ‘Food Products’  both advancing 0.4%. Within the ‘Non-Alcoholic Beverages’ group the classes ‘Mineral Waters, Soft Drinks, Fruit and Vegetable Juices’ and ‘Coffee, Tea, and Cocoa’ recorded increases of 0.6% and 0.1% respectively.

The index for the divisions ‘Clothing and Footwear’, ‘Transport’ and ‘Miscellaneous Goods and Services’ all recorded increases of 0.3%. Within the division ‘Clothing and Footwear’, the group ‘Footwear’ moved upwards by 0.5%, while the ‘Clothing’ group advanced 0.2%. For the ‘Transport’ division, the upward movement was “mainly attributable to a rise in prices for petrol” while the increase in the division ‘Miscellaneous Goods and Services’ was due to the “increase in the cost of personal care products and services”.

The divisions ‘Communication’ and ‘Alcoholic Beverages’ each grew by 0.1% for September 2018. The former was “mainly as a result of a rate change during the month under review” while the upward movements in the ‘Alcoholic Beverages’ division was attributed to the price increases for ‘Wine’ and ‘Spirits’

Notably, the other divisions ‘Health’, ‘Recreation and Culture’ and ‘Restaurants and Accommodation Services’ had no effect on the index for September 2018. 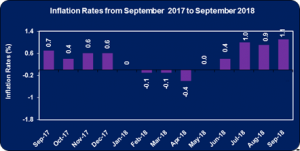