Margaritaville Turks Limited (MTL), for the nine months ended February 28, 2019, reported revenues of $5.52 million versus $4.06 million in the prior corresponding period. Management stated that, “This was earned from the 827,320 passengers that descended on the port for the nine months. For the quarter, revenues closed at $1.96 million (2018: $1.81 million). MTL indicated that, “This was from the 296,318 passengers that cruised into the port which resulted in a spend rate of US$6.62 versus 266,675 passengers in the similar period in the prior year at a spend rate of US$6.80 per passenger. Revenue per passenger will vary marginally from one period to another. Even where aggregate passenger numbers are similar there can be variations due to dwell time, the time of day that the ship called and the differing weather patterns on the ship call days.”

Management highlighted that, “most of the refurbishing and repairs necessitated as a result of damage associated with Hurricanes Irma and Marie in 2017 and now complete. Ongoing maintenance and replacement of fixed assets accounted for the later expenditure.” 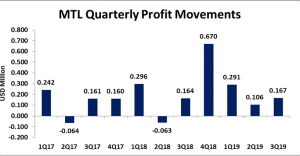