Margaritaville (Turks) Ltd (MTL) for the nine months ended February 28, 2018 reported Total Revenue of  US$4.06 million, a 12% decline relative to the US$4.64 recorded for the prior financial year. The company noted, “The revenue number is significant because the location suffered from two Category 5 hurricanes, back to back, during early September 2017.The location and the entire island were severely damaged and had to be closed for a portion of September and all of October.” Total revenue for the quarter amounted to US$1.81 million, a marginal decline of 1% compared with the US$1.82 million reported for the comparable quarter in 2017.

Cost of sales for the period amounted to US$1.08 million, a 12% contraction relative to US$1.23 million recorded the previous year. This resulted in gross profit for the period of US$2.98 million, 12% lower than last year’s US$3.41 million reported in 2017. The Company noted, “the management team has done a great job in containing the exposure to product loss from spoilage as a result of the loss of Electricity associated with the hurricanes.”

Total expenses for the period declined by 8% year over year, moving from US$3.07 million for the nine month ended February 2017 to US$2.83 million.  Of this,

Total Assets as at February 28,2018  amounted to US$5.56 million. Management noted, “The Company has expended US$335,756 on Fixed Assets acquisition during the nine month YTD, The larger share of this relates to replacement of assets associated with hurricane damages” 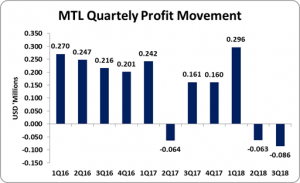