NCB Financial Group Limited (NCBFG), for the nine months ended June 30, 2019, reported a 27% increase in net interest income relative to the corresponding period in 2018, to total $32.36 billion (2018: $25.42 billion). The movement according to management was due to, “growth in our loan portfolio, the consolidation of GHL and the inclusion of nine months of financial performance of Clarien Group Limited (Clarien) compared to six months in the prior year”. For the quarter, Net Interest Income improved 30% to close at $12.37 billion (2018: $9.51 billion).  Interest income for the period rose 23% year over year to $45.68 billion compared to $37.92 billion in 2018, while interest expense amounted to $14.32 billion relative to $12.51 billion for the corresponding period in 2018.

The bank also reported a gain on foreign currency and investment activities of $8.75 billion, a decline of 23% relative to $11.41 billion in 2018. The Company noted, “driven by a reduction in gains from the sale of debt securities. Net results from insurance activities for the period increased 218% to $7.24 billion (2018: $2.28 million). According to NCBFG, “the net result from insurance activities grew by $5.0 billion or 218% over the prior year. One of our Jamaican life insurance subsidiaries benefitted from improved spread performance and changing mortality assumptions, resulting in a significant contribution to the net profit. The consolidation of GHL’s insurance activities contributed 45% of net insurance revenues reported for the third quarter.”

Total Operating Expenses for the period amounted to $45.93 billion, an increase of 41% compared to the $32.68 billion reported for the nine months ended June 30, 2018. Expenses for the quarter rose 64% to close at $18.09 billion compared to $11 billion in 2018. According to NCBFG, “The consolidation of GHL and an additional quarter of Clarien’s results in the current reporting period contributed to 43% of this increase. The increased expenditure resulted in a cost to income ratio of 67.1%, up from 60.6% in the prior year; however, we have implemented cost optimisation strategies to ensure efficiency initiatives underway are successfully executed.” Of these expenses:

Consequently, operating profit decreased 10% to total $17.10 billion (2018: $18.97 billion). ‘Share of profit of associates’ rose by 47% to total $2.66 billion compared to $1.81 billion in 2018. The Group also reported negative goodwill on acquisition of subsidiary in 2018 of $4.39 billion relative to nil in 2019. This was as related to “the acquisition of Clarien”. ‘Gain on remeasurement of associate investment’ for the period amounted $2.33 billion relative to nil in 2018. Management indicated, “The results include a provisional gain of $2.3 billion on the remeasurement of the associate interest in Guardian Holdings Limited (GHL). The relevant accounting standard requires that the previous non-controlling interest be remeasured at the acquisition date fair value and any resulting gain or loss be recognised in the income statement.”

Gain on disposal of associate closed the period at $3.29 billion versus nil in 2018. According to management, “The Group disposed of 326,277,325 shares in JMMB Group Limited on December 27, 2018 at a price of $28.25 per share, resulting in the recording of a gain on disposal of $3.3 billion in the current period. JMMB Group Limited is therefore no longer an associate company of the Group.” 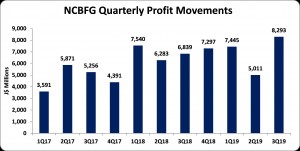