Net Fees and Commission Income amounted to $15.96 billion, an increase of 15% on 2017’s $13.89 billion. The company highlighted that, “the increase was due to the consolidation of Clarien. The improved fees earned by our Jamaican entities were driven by an increase in the number of corporate finance, investment and financing solutions offered by NCBCM. There was also growth in fees earned by our payment services, retail and SME segments stemming from increased e-commerce and credit transactions.”

The bank also reported a gain on foreign currency and investment activities of $15.61 billion, a growth of 102% relative to $7.73 billion in 2017. The Company noted the improvement resulted from, “an improving macro-economic environment coupled with high levels of JMD liquidity and declining interest rates generating a high demand for debt securities.” Insurance premium income for the year increased 14% to $8.66 billion (2017: $7.57 billion), while dividend income increased by 87% to a total of $553.31 million (2017: $295.12 million).

Total Operating Expenses for the year amounted to $50.35 billion, an increase of 31% compared to the $38.32 billion reported for the previous year. Expenses for the quarter rose 30% to close at $13.37 billion compared to $10.31 billion in 2017. According to NCBFG, “These increases were primarily due to our investments in digitization and the implementation of the agile methodology across the organization. These initiatives along with our cost optimisation strategies will result in the lowering of the cost to serve our customers and provide a better experience through our various channels.” Of these expenses:

Provision for credit losses increased 130% to $1.68 billion (2017: $729.23 million), while depreciation and amortization grew by 47% to $3.47 billion (2017: $2.36 billion). Policyholders’ and annuitants’ benefits and reserves increased by 13% to $4.73 billion relative to $4.18 billion for the prior year’s corresponding period. Impairment losses on securities amounted to $283.88 million relative to nil in 2017. This according to NCBFG was, “related entirely to debt securities classified as available-for-sale and loans and receivables.”

Gain on partial disposal of associate amounted to $837.48 million (2017: Nil). Management noted, “during the fourth quarter, we divested a portion of our investment in JMMB Group Limited, reducing our stake to 20.01% from 26.30%.” 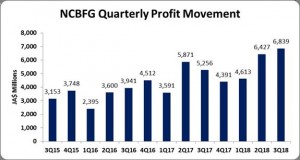