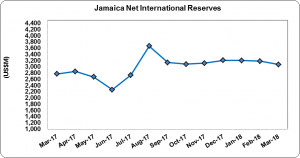 The country had surpassed the benchmark of US$2.54 billion outlined by the International Monetary Fund for March 2017. As such, Jamaica and the IMF have entered into a New Agreement to support growth and create jobs with the international body citing, “Jamaica has made good progress under the previous IMF – support program.”

The IMF recently concluded its third review under the new standby agreement, indicating that “Considerable progress has been achieved on macroeconomic policies and outcomes”. All performance criteria for the period ended December 2017 were met. As such, “Consideration by the IMF’s Executive Board is tentatively scheduled for April 2018. Upon approval, an additional US$233 million would be made available to Jamaica, bringing the total accessible credit to about US$1.033 billion.”

The Net International Reserve (NIR) target outlined as per the new agreement for the 2017/18 fiscal year is US$3.28 billion (see figure 2 above). As at March 2018, the Country closed the fiscal year US$0.21 million below targeted amount.