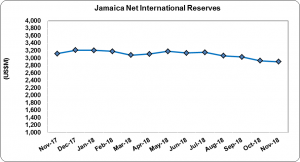 All performance criteria for the period ended December 2017 were met. The IMF further noted, “Financial sector stability is a prerequisite for strong and sustained growth. Ongoing prudential and supervisory improvements will enhance systemic stability.” “Continued reform implementation will not only safeguard hard-won gains but also deliver stronger growth and job creation.” The Net International Reserve (NIR) target outlined as per the new agreement for the 2018/19 fiscal year is US$3.22 billion (see figure 2 above). As at November 2018, the Country is US$0.32 million below targeted amount.