The U.S. Bureau of Economic Analysis indicated that, “Expenditures by foreign direct investors to acquire, establish, or expand U.S. businesses amounted to $259.6 billion (preliminary) in 2017.” In 2016, there was a decrease in expenditure by 32 percent from $379.7 billion (revised) which was below the annual average of $359.9 billion for 2014-2016. Additionally, majority of the total expenditures was accounted for in the acquisitions of existing businesses, as noted in previous years.

Expenditures by industry, country, and state in 2017 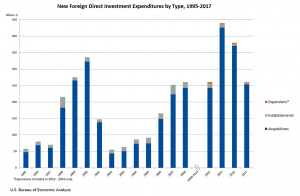