For the nine months period, finance costs fell 21% moving to $1.32 million relative to the $1.68 million recorded in 2018. Taxes incurred year-to-date for the period in review amounted to $9,000 relative to $7,000 reported for the comparable period the prior year.

Total comprehensive income for the period amounted to $44.27 million compared to the $51.31 million for the corresponding period in 2018. 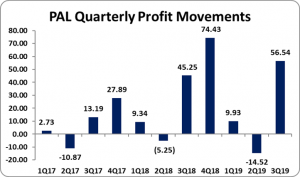