For the six months period, finance costs declined 22% moving from $1.15 million to the $901,000. There was also no taxes incurred year-to-date for the period in review or for the comparable period the prior year.

Total comprehensive loss for the period amounted to $265,000 compared to an income of $6.11 million for the corresponding period in 2017.

Consequently, Net loss attributable to shareholders for the period amounted to $4.59 million, versus a profit of $4.10 million compared to the corresponding period in 2017. 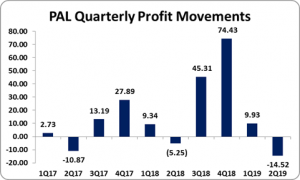