PBS reports three months loss attributable to shareholders of US$385,000

Direct expenses increased 9% to close the period at US$24.83 million when compared to $22.77 million for the same period of 2018. As such, gross profit for the period under review marginally declined to close at US$18.72 million (2018: US$18.75 million). PBS stated that, “the gross profit associated with the incremental revenue was offset by the impact of revenue mix.”

Finance costs increased 36% to total US$2.55 million versus US$1.88 million in 2018. PBS stated that, “this was primarily due to foreign exchange losses associated with the appreciation of the Jamaican dollar versus the United States dollar in the first quarter of 2018.” As such, profit before taxation amounted to US$171,000 relative to a profit of US$229,000 in 2018. 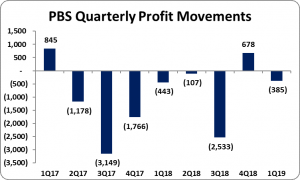