Selling, general and administrative expenses amounted to US$64.65 million (2017: US$68.13 million), a marginal decreased of 5%. As such, operating profit increased 85% for the period to total US$11.97 million relative to the US$6.49 million in 2017. Operating profit for the quarter totalled US$6.81 million, a 189% increase on the US$2.36 million reported in 2017. Management noted this was due to, “higher revenue and lower selling, general and administrative expenses.”

Finance costs decreased marginally to total US$9.16 million relative to US$9.20 million in 2017. Management noted, “the was due to foreign exchange losses associated with the appreciation of the Jamaican Dollar versus the United States dollar in the last quarter of 2018.” As such, profit before taxation amounted to US$2.81 million relative to a loss of US$2.72 in 2017. 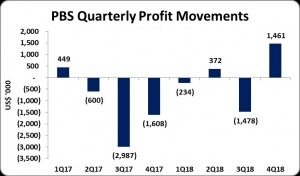