The U.S. Bureau of Economic Analysis indicated that, “State personal consumption expenditures (PCE) increased on average 4.3 percent in 2017, an acceleration from the 3.8 percent increase in 2016.” In addition, the PCE percentage change across all states ranged from 6.9 percent in Idaho to 2 percent in North Dakota. 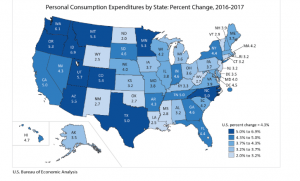 It was further stated by the BEA that, “Massachusetts, Connecticut and New Hampshire had above average per capita spending in housing and utilities, health care and food and beverages purchased for off-premises consumption.”

Additionally, “Mississippi, Arkansas, Alabama, and Oklahoma were among the states with the lowest per capita spending on housing and utilities and food and beverages purchased for off-premises consumption,” as mentioned by the BEA. 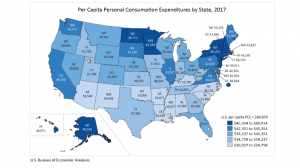