Share of results of associated companies rose 27% to $1.85 billion relative to $1.45 billion reported in the previous year.  The results of associated companies consisted principally of PJAM’s 32% investment in Sagicor. PJAM noted, “Our share of results of associated and joint venture companies increased for the quarter by $175 million to $1,033 million (2016: $858 million). Our share of earnings from Sagicor for the period increased by $425 million (32%) to $1,766 million. Sagicor’s half year results reflect strong performances in its insurance and annuities businesses. Newcastle, Chukka and Caribe performed satisfactorily during the period.” 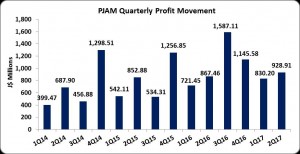