Portland JSX Limited (PJX), for the three months ended May 31, 2020, reported net loss on financial assets classified as at fair value through profit and loss of $1.33 million compared to a gain of $276,758 recorded in the same period last year.

Interest expense for the quarter amounted to $84,623 compared to nil for the corresponding quarter of 2019.

Taxation for the period under review was nil as the previous correspond quarter, resulting in net loss for the period of $1.40 million versus a net profit of $94,796 booked in the corresponding quarter in 2019. 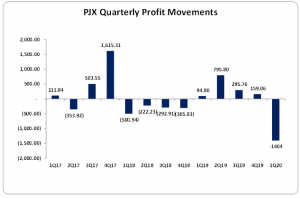