Portland JSX Limited (PJX), for the three months ended May 31, 2019, reported net gain on financial assets classified as at fair value through profit and loss of $276,758 compared to a loss of $313,175 recorded in the same period last year.

As such, total net interest income closed at $279,473 versus net interest expense of $287,600 documented in the previous corresponding quarter. 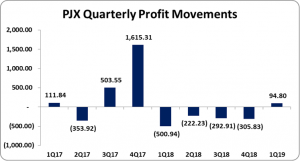