Interest income amounted to US$165,177, a 23% year over year increase, while the interest income from distribution of partnership closed at $3,695 compared to US$350,399 reported last year.  Other income of US$98 was reported for the period while it was NIL for 2016.  The company did not record interest expenses for the period under review relative to US$260,068 reported in 2016.

As at November 31, 2017, PJX recorded total assets of US$24.1 million compared to US$25.2 million reported in 2016. The major changes in assets included the decline in Cash and short-term deposits of US$14.65 million in during the nine-month period to total US$2.88 million. 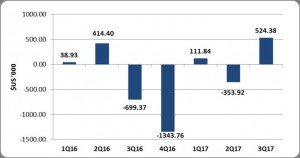