Production in construction down by 2.1% in euro area and by 1.6% in EU 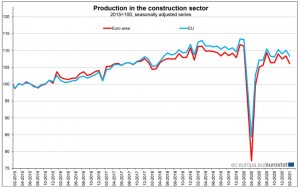