Production in construction falls in both euro area and EU28

Building construction in the EU28 declined 1.3%, while civil engineering remained stable. Building construction fell 0.7% during December 2018 for the euro area, while civil engineering registered a 0.4% increase. The following member states which recorded the largest decreases in production were n Slovenia (-12.4%), Germany (-4.1%) and the United Kingdom (-3.8%). The highest increases were observed in Sweden (+6.2%), Czechia (+3.0%) and Spain (+2.6%). 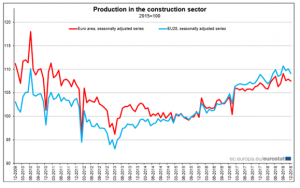