Reported in US$ (except where it is indicated otherwise)

Consequently, Operating Profit for the period declined 2% to $2.6.84 million (2018: $6.97 million). Operating profit for the quarter improved 20% to $4.06 million compared to $3.38 million recorded for the corresponding quarter of 2018. The company indicated, “the strong core operating performance for the period under review reflects the Group’s commitment to strategic initiatives aimed at optimizing value created and extracted from all portfolio companies. This materialized in the form of organic growth in key revenue lines which was further supported by cost synergies and efficiencies gains across the businesses.”

Profit before tax amounted to $26.75 million versus the $6.32 million booked in 2018. Taxation increased year over year by approximately 139% from $452,039 in 2018 to $1.08 million.  As such, Net Profit amounted to $25.67 million, a 337% increase when compared to the $5.87 million in 2018. Net profit for the quarter amounted to $22.23 million relative to $3.04 million booked for the second quarter of 2018. PROVEN noted, “This emanated from strong double-digit growth in core business operations, as well as the extraordinary gain from the partial sale of its holdings in Access Financial Services Limited (AFSL).”

Net profit attributable to shareholders for the period amounted to $23.79 million relative to $3.89 million documented in 2018. Total comprehensive income for the six months amounted to $27.27 million compared to $1.46 million reported for the prior financial year’s corresponding period.

Total Assets as at September 30, 2019 amounted to $648.20 million (2018: $533.25 million), an increase of 22%. The growth resulted from the Company booking $103 million in ‘Investment in Associates’ relative to nil in 2018. The Company also reported cash and cash equivalents of $123.58 million (2018: $83.51 million). Proven stated, “The year over year Balance Sheet growth reflects incremental acquisitions and organic growth. Noteworthy is the 47.98% increase in the cash and cash equivalent position, a significant percentage of which is attributed to the holding of near-cash interest-bearing assets in BOSLIL. This cash supports the business model and prudent asset-liability management of that portfolio.” 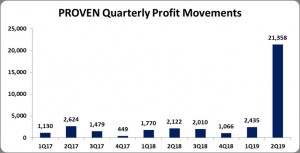