PTL mentioned that, “sales for the quarter did not include Lubricant sales made under the new JV arrangement of $64.3m and $162.6m year-to-date.”

In addition, the Company stated that, “since the beginning of this financial year, the Company commenced accounting for the lubricant business through the new joint venture blending operations with Allegheny and consequently its share of the profit from the venture, is reported in the Financial Statements which amounted to $1.9m in the current quarter and $4m Y-T-D.” 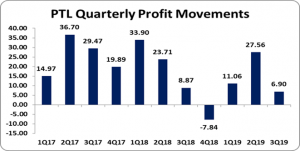