Other operating income amounted $5.05 million for the quarter, a reduction of $4.95 million compared to $10 million booked for the previous year’s corresponding period. The Company noted, “the foreign exchange devaluation was the main driver for this negative variance.”

PTL mentioned that, “the Company has responded and will continue to react to the challenges of the COVID-19 epidemic in a proactive and responsible manner. We have structured our operational framework in a manner to prioritize the safety of our staff members, customers and other stakeholders. We continue to pivot our operation to take advantage of any opportunity arising as a result of the pandemic.” 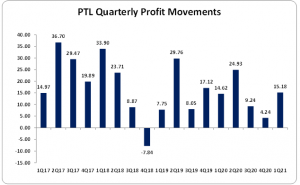