Other operating income amounted $22.90 million for the six months period, an increase of 269% compared to $6.21 million booked for the previous year’s corresponding period. PTL added that, “this additional income was mainly as a result of foreign exchange gains.” For the second quarter, other operating income fell by 46% to close at $12.90 million (2018: $23.68 million).

Pre-tax profit for the period totalled $45.20 million, 6% more than the $42.46 million reported in prior corresponding period. Taxes were charged for the period totalled $5.65 million relative to $4.95 million in 2018. As such, Net profit attributable to shareholders totalled $39.55 million, an increase of 5% (2018: $37.51 million). However, for the second quarter, net profit totalled $24.93 million in 2019 relative to $29.76 million in comparable quarter of 2018. The Company noted that the increase in net profit was attributable to, “the reduction on operating expenses, resulting from restructuring exercise carried out in the latter part of the year.”

Furthermore, Management noted, “We continue to build out our manufacturing operations with over $268 million in capital expenditure for the six months ended November 30, 2019. This expansion was financed in the main by the proceeds from our preference share issued earlier in the year.” 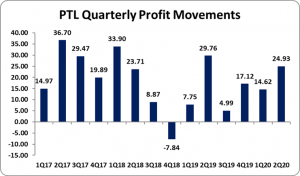