Consolidated Bakeries (Jamaica) Limited (PURITY) recorded a slight increase in revenues to $273.63 million from $271.04 million reported for the corresponding period in 2018.

Interest and other income closed at $831,254 versus $1.05 million reported in the previous corresponding period. While, finance cost fell by 14% to close at $2.77 million compared to $3.21 million booked twelve months earlier. 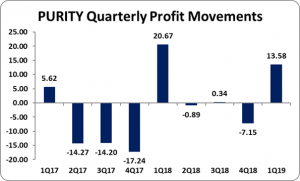