According to an estimate published by Eurostat, the statistical office of the European Union, for the third quarter of 2021 seasonally adjusted GDP for the euro area increased by 2.2% and by 2.1% in the EU, when compared with the previous quarter. Flashback to the second quarter, where GDP rose by 2.1% in the euro area and 2.0% in the EU. 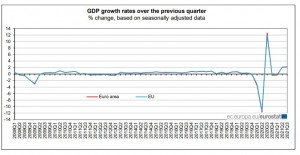 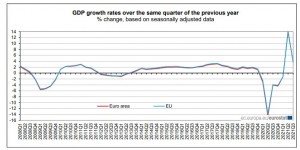 Among the Member States for which data are available for the third quarter 2021, Austria (+3.3%) recorded the highest increase compared to the previous quarter, followed by France (+3.0%) and Portugal (+2.9%). The lowest growth was recorded in Latvia (+0.3%) and GDP was stable in Lithuania (0.0%). The year on year growth rates were positive for all countries.