QWI Investments Limited (QWI), for the six months ended March 31, 2021, reported total income of $265.33 million relative to total loss of $622.75 million booked in the corresponding period last year. Of this:

Notably, Management stated that, “the Company’s portfolio is reviewed on an on-going basis with changes effected by the addition or disposal of investments as the Investment Committee believes will be advantageous to QWI. Subsequent to the March quarter, stock markets have generally shown favourable trends. We took advantage of such conditions to add to some of our existing holdings and reduced positions in others. Our management of the portfolio resulted in the NAV moving up by 9 percent from $1.21 at the end of the quarter to $1.32 at the end of April. In Jamaica, the continuing re-opening of the tourism sector, and growth seen in some of the other sectors in the economy such as construction, is encouraging.” 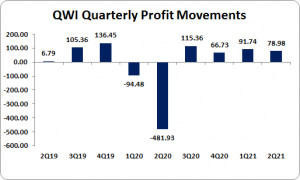