Direct expenses increased to $588.20 million, this compares to the prior year’s figure of $493.96 million, representing an increase of 19%. RJR noted that the increase was “due mainly to increased newsprint costs, increased costs for the staging of the Boy’s and Girl’s Championships, along with the higher cost of the National Track and Field Trials.”

Operating loss closed the period in review at $38 million versus operating profit of $159.89 million in 2021.

RJR noted that upon completion of their acquisition of 1834 Investments Limited, “will see an increase in their asset base of RJRGLEANER, an increase in available cash to complete our strategic digital investments” 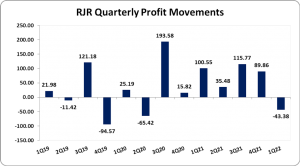