Radio Jamaica Limited (RJR), revenue for the six months ended September 30, 2022, declined by 4% to $2.74 billion from $2.86 billion in the prior comparable period. Revenue for the quarter increased marginally to $1.439 billion (2021: $1.436 billion). RJR noted that revenue was in line with prior year results and this was “driven mainly an increase in the Print and Online $1.1 billion (4%) division and decreases in the Audio/Visual $1.2 billion (2%) and Audio $405 million (1%) divisions.” Management went further to explain that “The group continued to experience softness in the overall advertising market as businesses continue to be impacted by the aforementioned local and global economic challenges.”

Direct expenses increased to $1.22 billion, this compares to the prior year’s figure of $1.12 billion, representing an increase of 8%.

Operating expenses increased for the period under review by 4% from $1.59 billion in 2021 to $1.65 billion in 2022. There was a 4% increase in selling expenses to $527.87 million (2021: $508.89 million), and a 2% decrease in administrative expenses to $676.72 million (2021: $687.85 million). Management noted that the increase in selling expenses were “driven by increased distribution-related costs.” In addition to this they attributed the increase in administrative and other operating costs to “ depreciation charges relating to infrastructure upgrades and one-of consultancy costs” and ”increased utility costs, as well as higher repair and maintenance costs.” 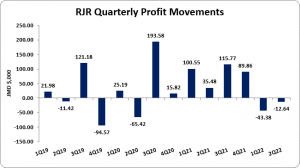