Direct expenses decreased to $2.59 billion, this compares to the prior year’s figure of $2.74 billion, indicating a decline of 6%. For the quarter, direct expenses fell by 4% amounting to $570.36 million (2019: $595.03 million). The Company stated that, “this was due mainly to the FIFA World Cup and related costs in prior year which did not apply in the year under review.”

Administrative expenses closed at $1.25 billion (2019: $1.26 billion). Management highlighted that, “this was as a result of reduction in amortization cost for intangible assets.”

Other operating expenses amounted to $915.94 million versus $765.33 million reported in the previous comparable period. Management stated that this increase was, “due to costs related to new business feasibility study, and fees associated with the acquisition of new software across the group.”

Management also noted that, “in spite of the Group’s robust performance for the eleven (11) months of the year, the impact of COVID-19, locally and internationally, dramatically and negatively impacted business revenues in the month of March 2020. For March alone, the Group incurred almost $50 million in advertising contract cancellations, while staff welfare, sanitization and related expenses increased due to measures implemented to safeguard staff and customers.”

RJR mentioned that, “During the financial year under review the Group continued implementation of its roadmap towards full digital transformation, which adds conversion of business process functions to the already underway broadcast workflow transition pending digital switchover. TVJ brought in new revenue streams from the Cayman Islands through the launch of the TVJ International channel, while locally, TVJ started earning re-transmission fees from the largest cable provider, FLOW. The radio and television Transmission networks were improved across the island, with further improvements slated for the new financial year, while the Group maintained its strong brand equity through continued unique product differentiation in quality local programming and relevant content.” 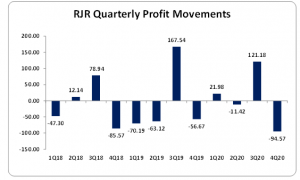