IronRock Insurance Company Limited (ROC), for the three months ended March 2021, posted gross premiums of $198.65 million relative to $178.67 million booked in the prior corresponding quarter, this represents an 11% increase year over year.

Net earned premium adjustment closed the period under review at $5.65 million, compared to an unearned adjustment of $1.08 million booked in 2020, this resulting in net earned premium of $48.49 million for the three months period versus $50.80 million in the previous corresponding quarter.

In addition, the company booked net claims of $18.51 million relative to $27.62 million reported in the previous comparable quarter.

Operating expenses, for the three months period, decreased to $44.13 million relative to $45.06 million in the prior corresponding quarter. As such, underwriting loss improved over the period under review closing at $10.93 million versus a loss of $23.06 million in 2020. Management noted, “was primarily driven by top line growth, expense control, increased commissions earned and lower net claims.”

ROC stated, “During the quarter we launched a new motor product called Pay As You Drive (PAYD), which uses a device from Guardsman Group to assess your driving behaviour and give you premium refunds for good driving scores. It’s called Telematics Insurance, and IronRock is the first insurer in Jamaica to offer it. We see this as a first step in the inevitable progression towards smarter, data driven insurance.” 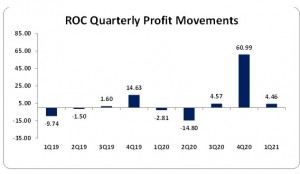