ROC recorded $50.33 million for total other income, relative to $51.03 million booked for the nine months ended September 2020. Of this:

As a result, the Company recorded a loss before taxes of $8.85 million compared to a loss of $13.04 million the prior period, while loss before tax for the quarter totalled $6.05 million relative to a profit of $4.57 million for the comparable quarter in 2020. Since there was no tax recorded for the period, net loss amounted to $8.85 million (2020: net loss of $13.04 million). For the quarter, net loss closed at $6.05 million compared to loss of $4.57 million in the same period last year.

Management noted, “The third quarter saw continued price competition in the property and motor markets, however by the end of the quarter the market began showing signs that pricing was beginning to stabilize. Despite the soft market conditions, we acquired a number of new corporate accounts at risk adjusted pricing levels well above market levels and we maintained growth in our retail direct client portfolio.”

Furthermore, ROC also stated that, “Earlier in the year we introduced Motor products targeted at, and with coverage and rating tailored to, specific market segments, with the added bonus of the introduction of a range of installment plans for premium payment. The take up has been excellent and we are particularly pleased that the majority of the engagement by our clients has     taken place through our digital platforms, on the web and through our mobile application. Additionally, the upgrade  of our eCommerce payment portal now allows clients to set up periodic recurring payments which has made it  easier  for our  clients  to  manage  their  payment  plans  and  improved  our  internal  efficiency  significantly.  Based  on participation  rates,  that  have  exceeded  our  projections,  it   is   obvious   that   these   innovations have been welcomed by our direct clients and auger well for increased growth in that portfolio.”

Management highlighted that, “the accident frequency and loss ratios of these products are significantly lower than those of our standard Motor policies, thus confirming that our risk assessment strategy is correct and offering us opportunities for profitable growth in the future. During the quarter we began investing in a strategic overhaul of the Company’s IT infrastructure aimed at improving efficiencies of our internal processes, allow for a more robust response to disaster events and complement our transition to a fluid Work From Home protocol. These and other changes will also put us in good stead for the introduction of planned technology roll-outs which will allow for new and more customer centric ways of delivering service to our valued clients.” 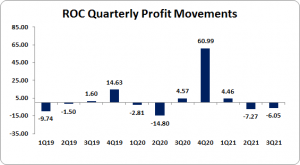