As a result, the company recorded a loss before taxes of $17.61 million compared to a loss of $11.24 million the prior period,  while loss for the quarter totalled $14.80 million relative to the loss of $1.5 million for the comparable quarter in 2019. Since there was no tax recorded for the period, net loss equals pre-tax loss for both the quarter and six months period.

Management noted, “During the financial quarter ended 30 June 2020, our operations continued to be affected by the impact of the COVID-19 pandemic on the economic and social fabric of our society. The most noticeable adverse effect has been on our revenue growth rate, which has tapered off from the strong momentum built in the first quarter.”

Furthermore, “There have been some positive impacts, mainly brought on by changes in the way we do business. Client engagement through our digital platforms has grown significantly, and we expect this effect to persist. Going forward, this should help us efficiently grow our direct client portfolio. Additionally, the Work From Home (“WFH”) model that we implemented during the government mandated lock-downs proved to be so effective, that we have now incorporated WFH into our normal operations.” Management stated. 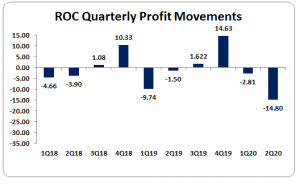