SALF also noted that, “domestic sales continue to perform well, growing by 16.7% above prior year as we deepen our penetration in existing channels and access new ones. Sales to the trade through our distribution partner Lasco was $655M, 13% above prior year. Export sales also did well, as both the Canadian and Barbadian market performed, growing year on year by 440% and 220% respectively. Our contract packaging sales grew 35% above last year.”

Net profit attributable to shareholders amounted to $219.68 million relative to $69.63 million booked twelve months earlier. Management noted, “profits we buoyed by strong sales performance, with the Group achieving sales over one billion ($1.041B), for the first time in the Company’s history. SALF noted, “the optimization of factory operations resulted in improved margins, which also contributed.”

In May we launched our Mountain Bliss 876 (MB876) brand in keeping with our strategy to engage younger consumers. MB876 featured two SKU’s the Gold, which is a freeze-dried coffee and Classic, an agglomerated coffee. Within 5 months of launch we have gained retail distribution of 70%. 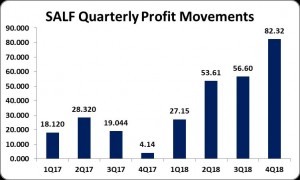