Sagicor Select Funds Limited (SELECTF), for the Three months ended March 31, 2020 reported net investment loss of $1.46 billion relative to an income of $18.23 million booked March 31, 2019. Management noted, “Total Income of negative $1,459 million was largely attributable to the unrealized loss in the value of the investments. The fund holds securities listed on the JSE, as such the stocks held in the fund recorded declines of $1,482 million. This was reflective of overall market conditions that prevailed during the quarter. Notwithstanding, the fund benefitted from cash income from dividends and interest of J$22 million and J$0.4 million, respectively.”

As such, total loss for the period under review equated $1.46 billion, as for 2019 first quarter, total revenue amounted to $18.23 million.

Consequently, net loss closed the three months period at $1.48 billion, compared to a net profit of $16.83 million reported for the first quarter ended March 31, 2019. The Company highlighted, “This outturn was attributable primarily to negative income earned and expenses for the period.”

Total assets, as at March 2020, amounted to $4.47 billion (2019: $1.12 billion). Of this, Cash and Cash Equivalents closed at $93.20 million, while Financial assets at fair value through profit or loss totalled $4.38 billion. SELECTF mentioned, “During the quarter, one new financial company Caribbean Assurance Brokers was listed on the market and shares in this company were purchased.” 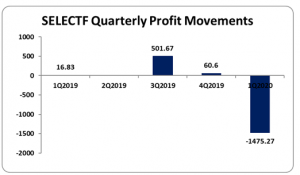