Net changes in fair value on financial assets at fair value through P&L for the nine month period amounted to a loss $29.87 million compared to a gain of $922.49 million booked in 2021.

SELECTMD reported that, “During the nine months to September 2022, the fund saw a fair value loss on its financial assets of $29.9 million, owing to price depreciation in manufacturing and distribution companies.” 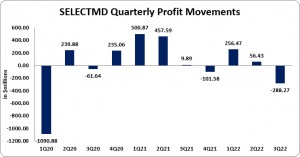