Net profits attributable to shareholders amounted to $354.60 million, a year over year improvement from the $337.73 million recorded a year earlier. Total comprehensive income for the quarter amounted to $280.92 million compared to $306.90 million booked for the first quarter of 2018.

SEP noted that, “consistent with the Group’s 2018 audited results, the business continues its positive trajectory; as the investments in acquisitions, distribution expansion, product innovations, increased exports and retooling of the manufacturing base continue to yield positive results.”

In addition, management stated that, “unfortunately, the Group suffered a J$150 million loss in the sugar operation for Q1. The decision has been to exit the sugar manufacturing operation at the end of the current crop, likely to be around mid-July 2019. The Group will look to transition the cane lands to other agriculture and Agri-processing ventures, to be announced in short order.” 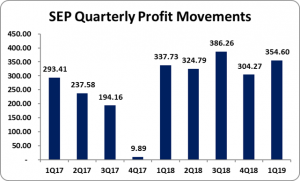