Seprod Limited (SEP) posted revenue totalling $24.38 billion compared to $16.51 billion recorded for the same period of the prior financial year, representing a 48% increase year over year. The Manufacturing Division recorded a 30% growth to close at $18.92 billion (2017: $14.59 billion), while the Distribution Division increased by 64% closing at $11.25 billion (2017: $6.87 billion). For the quarter, Revenue climbed grossly closing at $8.88 billion relative to $4.37 billion reported the prior year’s corresponding quarter.

SEP noted that, “the 2018 results are bolstered by the transfer of the former Jamaican dairy operations of Nestle within the Group effective 1 January 2018. These operations, located in Bog Walk, St. Catherine, produce the Supligen and Betty products, as well as co-manufacture products for international customers. In 2017, these operations were operated by Seprod under a management services contract and were not included in the Group’s results. Had these operations been included in the Group’s results in 2017 (and excluding the effect of the acquisition of the Facey Consumer business mentioned below), the increase in revenues for the twelve (12) months ended 31 December 2018 would have been J$4.67 billion or 29% and the increase in net profit would have been J$323 million or 46%.”

Management further indicated that the 2018 results also surged due to, “the acquisition of Facey Commodity Company Limited effective 1 October 2018. As of that date, Facey’s sole business comprises the distribution of consumer goods and pharmaceutical products in Jamaica. This acquisition serves to strengthen the Seprod Group’s distribution platform – a key strategic priority for the Group. This acquisition contributed revenues of J$3.42 billion and net profit of J$218 million for Q4.”

The Company highlighted that, “consistent with the Group’s Q3 report, the business continues its strong trajectory; as the investments in acquisitions, distribution expansion, product innovations, increased exports and retooling of the manufacturing base continue to yield positive results.

Furthermore, Seprod stated that, “unfortunately, the Group suffered a J$275 million loss in the sugar operation for the period and we are now actively engaged in discussions with stakeholders as we move to eliminate these losses in the sugar manufacturing operation.” 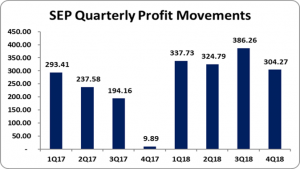