Seprod Limited (SEP), for the three months ended March 31, 2022, posted revenue totalling $11.81 billion compared to $$9.58 billion recorded for the same period of the prior financial year, representing a 23% increase year over year. The Manufacturing Division recorded a 37% increase in revenue to close at $7.21 billion (2021: $5.24 billion), while the Distribution Division increased by 14% closing at $8.45 billion (2021: $7.40 billion). SEP noted that, “The revenue growth was driven by robust export growth, improved product mix and price increases.”

Profit before taxation grew to $739.63 million for the period under review, a 7% uptick relative to the $691.80 million reported in the same quarter last year.

Total comprehensive income for the quarter amounted to $614.28 million compared to $602.43 million booked for the first quarter of 2021.

Management noted, “Overall, the global market is highly volatile and there is downside risk of higher input prices and availability, which we have no control over. The cost of key raw materials are at a 10 year high levels and is showing very little sign of retreating.” 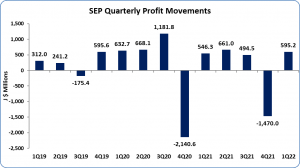