Total revenues excluding impairment losses on loans for the year ended October 31, 2017 was $41.7 billion, representing an increase of $2.9 billion or 7% above prior year. There was increased retail loan and transaction volumes across our business lines, as well as improved non‐interest revenue

Total Operating Expenses for the year end amounted to $21.29 billion, a 3% growth from the $20.70 billion booked for the prior year.  Under operating expenses:

Profit attributable to shareholders amounted to $12.17 billion, 8% more than the total of $11.30 billion a year earlier.

At the financial year, the company’s assets totaled $490.88 billion, 3% more than its value a year ago. The increase in total assets was primarily driven by increases in ‘cash resources’ by $10.20 billion to a total of $116.48 billion and in ‘Retirement Benefits Assets’ by $7.65 billion. ‘Investments Securities’ also contributed to the increase in the total assets base with a $3.17 billion increase year over year to $120.29 billion (2016: $117.12 billion). SGJ noted, “Our cash resources held to meet statutory reserves and the Group’s prudential liquidity targets stood at $116.5 billion, up from $106.3 billion last year due to increased liquidity from inflows of retail and commercial deposits. We continued to maintain adequate liquidity levels to enable us to respond effectively to changes in cash flow requirements.”

Management also noted, “Our loan portfolio was flat year over year closing at $166.5 billion as at October 31, 2017, driven by an overall decline in our foreign currency portfolio.  Our small business, residential mortgages and personal loans continue to show solid performance quarter over quarter and year over year.” 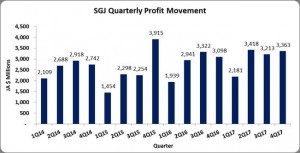