Sterling Investments Limited (SIL) for the three months ended March 31, 2018, reported a 4% decline in total revenue to $31.44 million compared to $32.59 million recorded for the corresponding period in 2017.

Operating profit recorded for the period closed at $25.09 million relative to $22.06 million booked for the prior year, a 14% increase year over year.

No preference dividend expense for the period was recorded relative to the $3.50 million recorded in 2017.

Total comprehensive income for the year amounted to $47.81 million compared to $16.16 million booked for 2017. 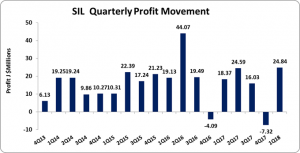