SJ noted, “the current year-to-date results beneﬁted mainly from overall good new business and portfolio growth which were both better than prior year.”The company also stated, “Other factors positively inﬂuencing the outcome for the period include the depreciation of the J$ to the US$ of 6% which gave rise to realized and unrealized gains attributable to US$ positions; the 36% appreciation of the Jamaica Stock Exchange main index with the Group earning trading gains and capital appreciation.”

Furthermore, Management highlighted that “administration expenses were higher than prior year by 16%, of which over half is due to consolidation of subsidiaries added in Q4 2018, reﬂecting increments to Team Members’ compensation expenses and higher Payments channels related costs in Sagicor Bank. The Group efﬁciency ratio of administration expenses to total revenue, a key measure of expense management, was unchanged year on year at 31%.”

Share of loss from joint venture amounted to $8.63 million relative to a share of profit of $42.60 million a year earlier. Share of profit from associate for the period totalled $680.05 million compared to a loss of $170.53 million last year.

In addition, SJ highlighted, “We remain optimistic about the future and prospects for the rest of 2019. The Jamaican economy continues to perform well in an environment of low unemployment, low interest rates, moderate inﬂation although the rate of GDP growth remains a concern. We continue to diligently push our strategies for growth while improving our efﬁciencies, all in order to improve our Clients’ experience of doing business with Sagicor and to earn attractive returns for our Stakeholders.” 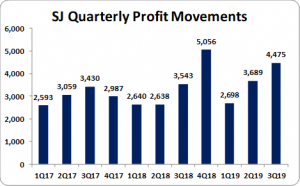