Share of profit from joint venture amounted to $213.70 million relative to a profit of $222.50 million the prior year.

Management advised that “Fees and other income also increased compared to prior year’s first quarter, attributable primarily to increase in fees from commercial banking activities and steady recovery in fees from assets under management. Volatility in equity markets, declining debt security prices and other unfavorable market trading conditions, resulted in a fair value loss of $393.28 million (March 2021: $1.20 billion gain).”

Management also stated that, “The segment was adversely impacted by unfavorable trading conditions and market volatility. Consequently, capital gains of $85.08 million were 79% less than prior year. The segment continued to benefit from growth in its interest earning assets base, which resulted in a 27%, or $305.99 million increase in net investment income.” 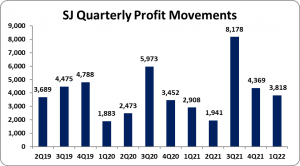