Administrative expenses amounted to $163.17 million (2019: $109.94 million), while other operating income totalled $5.27 million (2019: $747,000). SML noted that the increase in administrative expenses was due to, “a significant FX loss of J$48.74M arising from the evaluation of our DBJ loan, SEZ fees, and repairs & maintenance and additional requirements based on our response to COVID 19.”

The company stated, “We expect little fluctuations in our results through to the end of the financial year, based around earning rent in US$, continuing with close to 100% occupancy and maintaining the status quo until year end.” 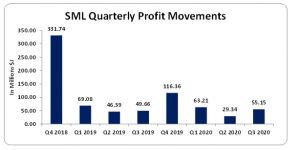