Stanley Motta Limited (SML) for the year ended December 31, 2018, booked a 273% increase in revenue to total $269.76 million compared to $72.26 million for the same period in 2017. For the quarter, revenue increased 231% to $97.56 million in 2018 compared to $29.52 million the previous year. SML indicated that, “this was due to income from Unit 4 which was completed in 2018, and the acquisition of Unity Capital which owns what is now called Unit 5 and therefore increased square footage available to rent.” 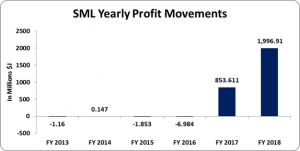