Other operating income closed at $2.04 million relative to the $5.25 million that was documented for the six months ended June 30, 2020.

Administrative expenses amounted to $111.24 million (2020: $112.82 million). Management noted, “the decreases are due to a lower FX loss of J$20.7M for the YTD period compared to a loss of J$35.2M for the same period of prior year. The FX Losses are associated with the revaluation of our DBJ loan based in US dollars. This J$15M reduction in FX Loss year over year was offset by costs associated with planned building maintenance totaling J$14M.”

Tax expense year to date amounted to $1.99 million compared to $3.46 million incurred for the corresponding period in 2020.

Consequently, net profit for the period totaled $110.18 million (2020: $92.55 million). For the quarter, net profit increase 91% to $56.13 million relative to $29.34 million booked in 2020. SML stated, “This increase is attributable to the increase in revenue and demonstrates the company’s commitment to maintaining strong operational efficiency, while continuing the collection of rent in a timely manner.” 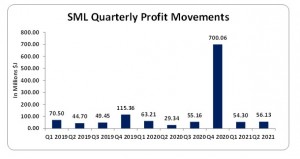