SOS highlighted that, “In January, we exported our first container of the year with products being delivered to Grenada and had plans to an additional 2 overseas projects set to be delivered during March and April. The first 2 months of the year had SOS on target to surpass our best quarter ever which was seen in the 1st quarter of 2019.”

Furthermore, the Company mentioned that, “During the last month of the quarter (March) the effect of the virus was evident as revenues declined year on year for the month by 17%.” 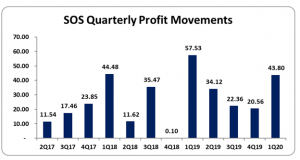