Sweet River Abattoir & Supplies Company Limited (SRA) for the six months ended September 30, 2017: recorded a 7% decline in revenue to $165.45 million relative to $178.23 million in the same period in 2016.  Revenue for the quarter declined 31% to close at $73.70 million relative to $107.23 million. SRA indicated, “this decrease was due to the Slaughtering of smaller size pigs as consumers have shifted their demand.”

Cost of sales fell 16% from $158.46 million in 2016 to $133.19 million in 2017. As a result, gross profit increased to $32.25 million, a 63% increase when compared to $19.78 million for the same period of 2016. Gross profit for the quarter improved 8% to $15.96 million compared to $14.82 million reported for the second quarter ended September 30, 2016. SRA reported that, “traditionally, the second quarter of our financial year is the most challenging as it includes two summer months when sales are typically low. Despite that, we managed to increase our gross profit by eight (8%) percent. Our challenge remains our ability to manage overhead expenses.”

Administrative expenses reported an increase of 54% from $14.75 million for the first six months of 2016 to $22.68 million in the corresponding quarter of 2017. Management noted, “this increase was due to utilities, Repair & maintenance haulage and interest payment on loan.”

Consequently, SRA recorded operating profit for the period of $9.58 million relative to $5.02 million booked for the prior year

Finance costs closed the period at $9.16 million, an increase of 125% when compared to $4.07 million for the corresponding period last year.

SRA noted, “we are confident that we will recover during the December quarter as it is usually the best for pork sales. We have noted a shift in the market to smaller cuts, and we as a company have placed ourselves in a position to respond to this change in market demand’ Smaller pigs will result in smaller hams and other cuts thus making them more affordable’ Our expectation is that a greater percentage of the workforce will be able to purchase pork which is currently more expensive than chicken. Our direct entry into the hotel markets is also expected to significantly increase our sales.” 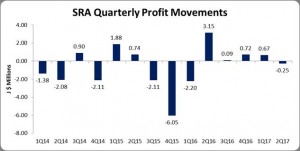